Set and costume designer Alice Hoult kicks off our first ecoscenography guest blog series with her journey of resourcefulness. I first met her at a Julie’s Bicycle sustainability event in London in 2013 and we have since joined forces on an ecological initiative that we will be launching in the coming months (watch this space!). Alice’s commitment to rethinking unsustainable practices is infectious – she gives you hope that we can all do our bit to inspire change. I can relate so much to her story.

I started thinking about ecoscenogaphy a couple of years ago. It came as a fairly sudden realisation – the feeling that there was something not quite right in my creative practice. Growing up, I always had a strong affinity with the environment and have increasingly become more conscious about reducing my impact. However, in the past I’ve felt that my eco-mindedness has had to take a backseat when it came to my working-life.

I was confronted with this realisation whilst working on a theatre production a couple of years ago. Leading up to tech week, it became apparent that we would need to build a large MDF ‘wall’ on stage in addition to the set that I had already designed. I ran up to the director and production manager and firmly protested this decision but they simply looked at me like I was mad. You see, I’d tried so hard to utilise the lovely exposed-brick wall and concrete floor of the theatre in my design (and in doing so, avoiding the creation of unnecessary waste). I realised that while my mind had already jumped ahead to the disposal stage of the set, no one else’s had.

Unfortunately, we did end up throwing the newly constructed wall in a skip at the end of the production. This left me with a bitter taste: I would never incur such wastage in my personal life, so why should I have to in my professional one? It got me thinking about how and why these things happen in theatre – the time, financial pressures and the desire to please seem to be the main ones, plus the fact that no one wants to be a ‘No’ person. This prompted me to do some research – to find other designers out there thinking the same things as me and also doing something about it. Finding a community of like-minded designers has made me more confident to speak up about my own eco values. It doesn’t always work out, and it’s easy to feel helpless in the face of the many inevitable failures. Change is incremental and we must accept that it’s a long path to sustainability for an entire industry. Even so, I believe that the best change starts from the ground up.

Luckily, I’ve meet some really inspiring collaborators. Director Poonam Brah, actress Dina Mousawi and I started 3Fates Theatre a few years ago. Our style is born out of a DIY aesthetic where we mix high-tech and low-key materials, objects and imagery. Through our productions I’ve had the opportunity to experiment with found objects, reclaimed and recycled materials. For example, the set for our last scratch performance was built out of blue plastic milk-crates which we borrowed from local groceries and returned the next day for collection by the milk delivery company.

I’ve found that resourcefulness and eco-consciousness often go hand-in-hand. For example, I was once given the task of creating an entire library set for a community project in Peckham with Time to Change (a charity who works with mental health issues). Borrowing library furniture from local schools and buying books from local charity shops saved us a large portion of our budget. After the show, some books were given to cast and crew, while the theatre used the rest to make a library of their own in the corner of their bar area. Nothing went in the bin! 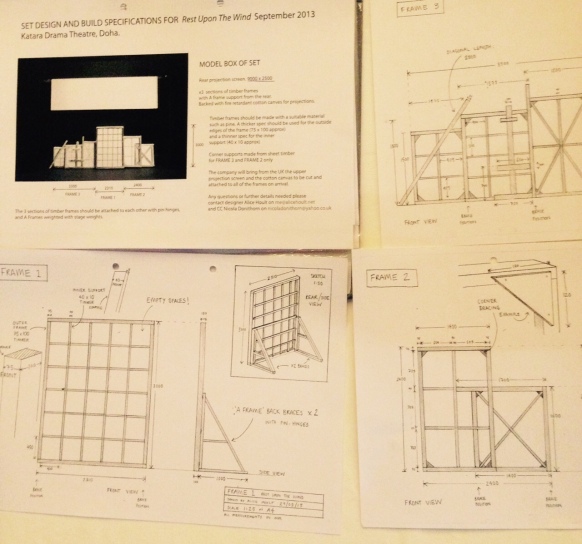 Nonetheless, I’ve found that things can also swing wildly from success to failure. For example, I recently designed a show about the life of the painter and poet Khalil Gibran. The idea for this set was that a simple timber construction (made to look like artists canvases stacked together) could also become a projection surface. During our London season, everything went swimmingly: I hired fine-artists to make the stretchers for the canvases which were also given back to them after the production for re-use. All great (!) until the show proceeded to tour various Gulf States a number of times. The Gulf is possibly the hardest place in the world to make people care about the environment (It’s all tiny plastic bottles and air conditioning…don’t get me started!). Unfortunately, the set was so simple to build that the producer decided to build it afresh in each venue rather than spend money transporting it. I’m uncertain as to which is better…

I’m beginning to find a way to balance my ecological values with my creative professional role. There is still much to explore. A group of eco-conscious designers (Tanja Beer, Andrea Carr and Bethany Wells) and I are working towards creating a pledge – a sort of ‘eco-stamp’ to help theatre practitioners to more effectively communicate their desire to work in an environmentally conscious way. I’m also excited about our next 3Fates project which is about the River Thames. It is still in its planning stages but the starting point for my design will be to try and source as much of the set as possible from the river itself.

I think that incorporating sustainability into the planning stages of my work has helped me define my creativity further, rather than placing limitations on it. I’ve always had an innate desire to make work that comes from the world around me. Using found objects and recycled materials also chimes with my own personal aesthetic.

When it comes to stage design, I have no idea if I have a ‘style’ or not, but I always try to strip away from extraneous objects, ideas and materials during the creative process. I want everything that passes in front of the audience’s eyes to be loaded with meaning, carefully chosen and essential. The opportunity to play with the expectations of audiences – that gap between the audience and the stage into which the audience pours their own imagination – is what fascinates me most about performance-making. And I’m learning as I go that innovative and exciting ideas don’t have to cost the earth.

Alice Hoult is a set and costume designer based in London. She is a founding member of 3Fates theatre company, currently developing work with the National Theatre Studio, London, and with whom she took part in the Copeland Fellowship at Amherst College, Massachusetts USA. Their shows RETURN and To Close Your Eyes is to Travel have been seen at Liverpool Arab Arts Festival, Aat international Theatre Festival (Amman, Jordan) The Yard Theatre, Tara Arts and Rich Mix in London.